Get your refund before it’s too late! 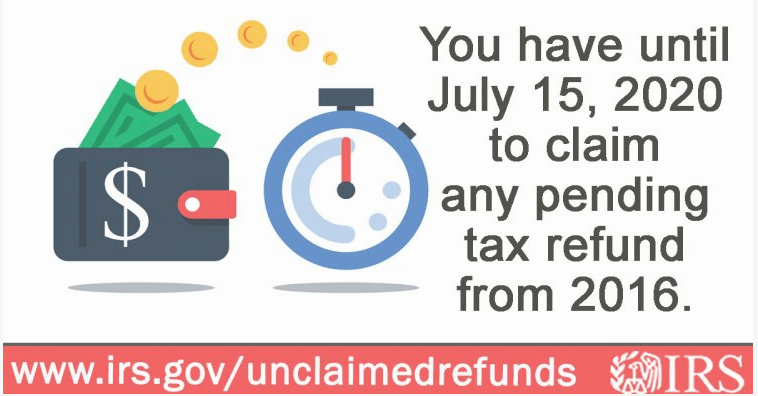 You know how last week we discussed how the IRS paid $1.4 billion too many in EIP checks? On the flip side, it looks like the IRS may get to pocket $1.5 billion too many in unclaimed taxpayer refunds. Do two wrongs make a right? They do almost perfectly even out.

The IRS reminded taxpayers this week that July 15 is not just the deadline for 2019 taxes and 2020 estimated tax payments, it is also the deadline to claim 2016 tax refunds.

Using 2016 as an example, the filing deadline for the 2016 tax return was April 15 2017. Three years from that date is April 15, 2020. However, since this year we had a three-month national emergency filing postponement, the deadline is July 15, 2020. The three extra months are also available for claims of 2016 refunds.

When does the second part of the limitation, the “two years from the date the tax was paid” part, come into play?

The most common situation when this happens is when a taxpayer has tax withheld from wages or dividends or other types of income, and the taxpayer doesn’t file a tax return.

Taxpayers who are non-filers only get two years from the date the withholding was paid to claim the refund. Tax withholding is deemed to have been paid on the last day prescribed for a tax return filing, without regard to extensions.

Using 2016 as an example again, let’s imagine a taxpayer who had 2016 W2 wage income with federal income tax withholding, and this taxpayer doesn’t file their 2016 tax return. The withholding tax is deemed to have been paid on April 15 2017, although it was likely paid earlier. The taxpayer has until April 15, 2019 to claim a refund for the tax withheld.

If the refund claim is filed after the statute of limitations expires, the IRS considers the money Excess Collections. Excess collections cannot be paid back to the taxpayer and will not be applied to a future year as an estimated tax payment.

So: if you think you may be entitled to a 2016 tax refund, you have only 11 days left to file your claim.

Automatic six-month extension: can we ask for an extension of time to file until January 15, 2021?

I received this question last week and I thought it was a good one to share with our readers.

If we file the automatic extension of July 15, do we get extra time until January 15 2021?

The short answer is NO.

As we discussed in CBP No. 10, taxpayers are allowed to request a six-month automatic extension of time to file their US federal tax return. The regular filing deadline is April 15. Six months from April 15 is October 15.

From what date do the six months start to count? From the regular deadline or the postponed deadline?

The IRS confirmed this week that the six-month period starts to count from the regular deadline, April 15. Even though the extension can be requested as late as July 15, we only get THREE extra months this year to prepare our tax returns.

The IRS also confirmed that, despite the many requests to further postpone the filing deadline due to the growing number of COVID-19 cases across the country, the deadline will not be postponed any further and everyone must file by July 15.

All of us U.S. taxpayers have two options: either we finish our tax return and we file by July 15 , or we request an extension of time to file and buy ourselves three extra months through October 15.

A link to the form and instructions to request the extension can be found on CBP No. 10.

And with this, our tax update is over and I leave to enjoy the rest of your Sunday.