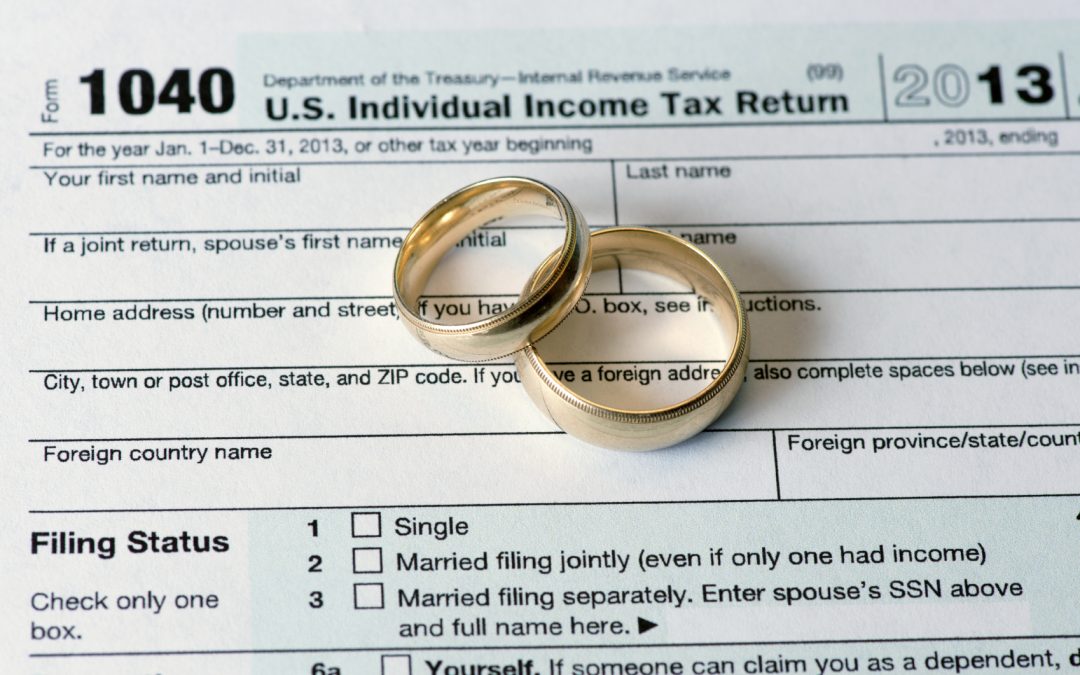 This week we are going to discuss how the USA taxes married couples.

In many countries, married spouses each have to file their own tax return. In others, they are forced to file a combined tax return. The USA, instead, gives spouses options.

Let’s find out what they are.

The Key Tax Insight of this week, #9 is:

Being married impacts your tax filing status, and therefore, the amount of tax you pay.

Before we start discussing the three filing options, it is important to understand who is considered married for this purpose. It may seem like a straightforward question, but I have, over the years, met many an expat who told me, with great conviction, that they were “single” because their spouse was foreign and they got married abroad.

Is someone who marries a foreigner abroad considered single by the US government?

Short answer: No (most of the times)

The general rule is that a foreign marriage will be recognized by the United States if it is not contrary to US law and it is valid in the country where it was performed.

That one is an easy example.

Some countries allow arranged child marriages. Are those marriages recognized by the USA?

Incredibly, most of the times, they would be. Twenty-five US states don’t have minimum marriage age requirements, and 47 states allow child marriages with certain conditions. I happen to live in one of just three US states where child marriages are not permitted. Pennsylvania was the latest state to ban child marriages, and it did so, wait for it…..on May 11th! This year! During the pandemic!

It’s shocking the things one learns when doing tax research. Add this to the list of causes I didn’t know I still needed to rally behind: overturning child marriage laws in the remaining 47 US states.

Until that happens, foreign arranged child marriages would be considered legal in most of the USA. Foreign same-sex marriages are also fully recognized by the USA since June 26th, 2015.

Polygamy is illegal in the USA, and this is the only example of foreign legal marriages, albeit in a small number of countries, that I could come up that would not be recognized by the USA.

The married filing jointly, MFJ status, was introduced in our tax laws in 1948. Until that point, every person filed their own tax return, whether they were married or single. But in 1948 Congress decided to provide a benefit to married couples by allowing them to file just one tax return and increase the income levels subject to each tax bracket. The goal was to give married couples a tax break, but not one that cut their taxes in half.

This is how it was supposed to work:

Back in 1948, when a woman got married, she was expected to quit her job and become a home maker. This was the cultural norm back then and is what most women did. By allowing this newly married couple, now living on one income, to file a joint tax return, the combined taxes would be taxed at a lower rate than if each spouse filed their own individual return.

This intended tax “bonus” worked until it didn’t.

Eventually, enough women remained in the workforce after getting married and having children, like RBG, that the marriage bonus became a marriage penalty. Two incomes on a joint tax return were taxed at higher rates than the same income earned by two individuals who were not married.

We still live with that legacy.

What are other consequences of filing a joint tax return with one’s spouse?

Joint and several liability means that both spouses are 100% responsible for the entire amount of tax, even when only one of the spouses earned all the income, and the government has the right to go after either one of the spouses for 100% of any tax owed or understated.

This is something that I believe needs to be better understood. Both spouses are required to sign a joint tax return because they are both held equally responsible for the accuracy of the tax return and the tax due.

Due to the joint liability risk, some spouses choose to file separate tax returns. They either do not trust their spouses or do not want to be responsible for any of their errors or omissions. In the USA, married spouses have the choice of filing separately. This is the MFS filing status.

If this option seems like a no-brainer: Why take liability risk when there is the possibility of avoiding it by filing separately? Shouldn’t all married couples file separate returns?

The issue with the MFS status is that it can be punitive.

With limited exceptions, such as when one of the spouses has low income and high medical expenses and the other has the reverse situation, income taxes are significantly higher when two working spouses file MFS tax returns.

These rules are disincentives to use the MFS filing status, but as we will see later, many US expats married to foreign nationals, will choose to use it anyway.

The third filing status option for married taxpayers, is Head of Household or HoH, and is only available under certain requirements. Although married couples always have the choice to file jointly or separately, they can only file HoH when certain conditions need to be met. If one of the spouses files HoH, the other is required to use MFS.

What are these requirements?

If the married couple lives in the USA, both spouses must live in separate homes for the last 6 months of the year. Just one night under the same roof during the second half of the year disallows HoH. Temporary absences are also insufficient. The spouses must have made a permanent decision to live apart.

If instead the married couple lives outside the USA and one of the spouses is a nonresident alien, then the above requirement doesn’t apply. They can live together, under the same roof, the ENTIRE year, and use HoH as long as the other requirements for the status are met:

What is the advantage of filing as HoH? Lower taxes and higher tax credits!

The purpose of this status is to provide relief to households run by single parents or by single income earners who are financially responsible for at least one other person living with them.

In the case of US expats married to foreign nationals, this status allows them to reduce their US tax burden, even when they live with their foreign spouse, and even if the foreign spouse is a high earner.

The most common example of this situation is a married US citizen with one or more children, living together in the country of citizenship of the foreign spouse. The foreign spouse remains outside the US tax system, which is generally how they like it, and the US citizen is not slammed by having to file under the onerous MFS rules.

What happens with the US expat doesn’t have any dependents? In that case, the only options are filing a joint return with the foreign spouse, which brings the foreign spouse fully under the US tax system, or file MFS. Both options can have serious drawbacks. Most foreign spouses, understandably, have little appetite to voluntarily become US taxpayers!

If the foreign spouse earns income, is a business owner or an investor, bringing that person into the US tax system can be complicated and expensive.

The US spouse many times feels that they do not have any reasonable choice but to file a separate tax return from their foreign spouse. But we explained above, filing MFS status causes the US taxpayer taxes to be higher.

This hardly seems fair! A US citizen can legitimately feel discriminated against by having to pay higher taxes just because they live abroad with a foreign spouse who does not want to be taxed by the USA.

Have we gone full circle? Apparently so…..

Like we mentioned at the beginning of this newsletter: all of us will encounter discriminatory situations at different points in our lives, and this is just one small example.

To every extent possible, US taxpayers abroad married to foreigners should carefully check if they can avail themselves of the more favorable HoH status, and when this is not possible, understand the US tax  rules and tax treaty benefits available to them to minimize any additional resulting tax burden.

We will cover those rules and treaty benefit in our upcoming newsletters. Help is on the way!

Until next week. Much love,